The History of Beach Umbrellas 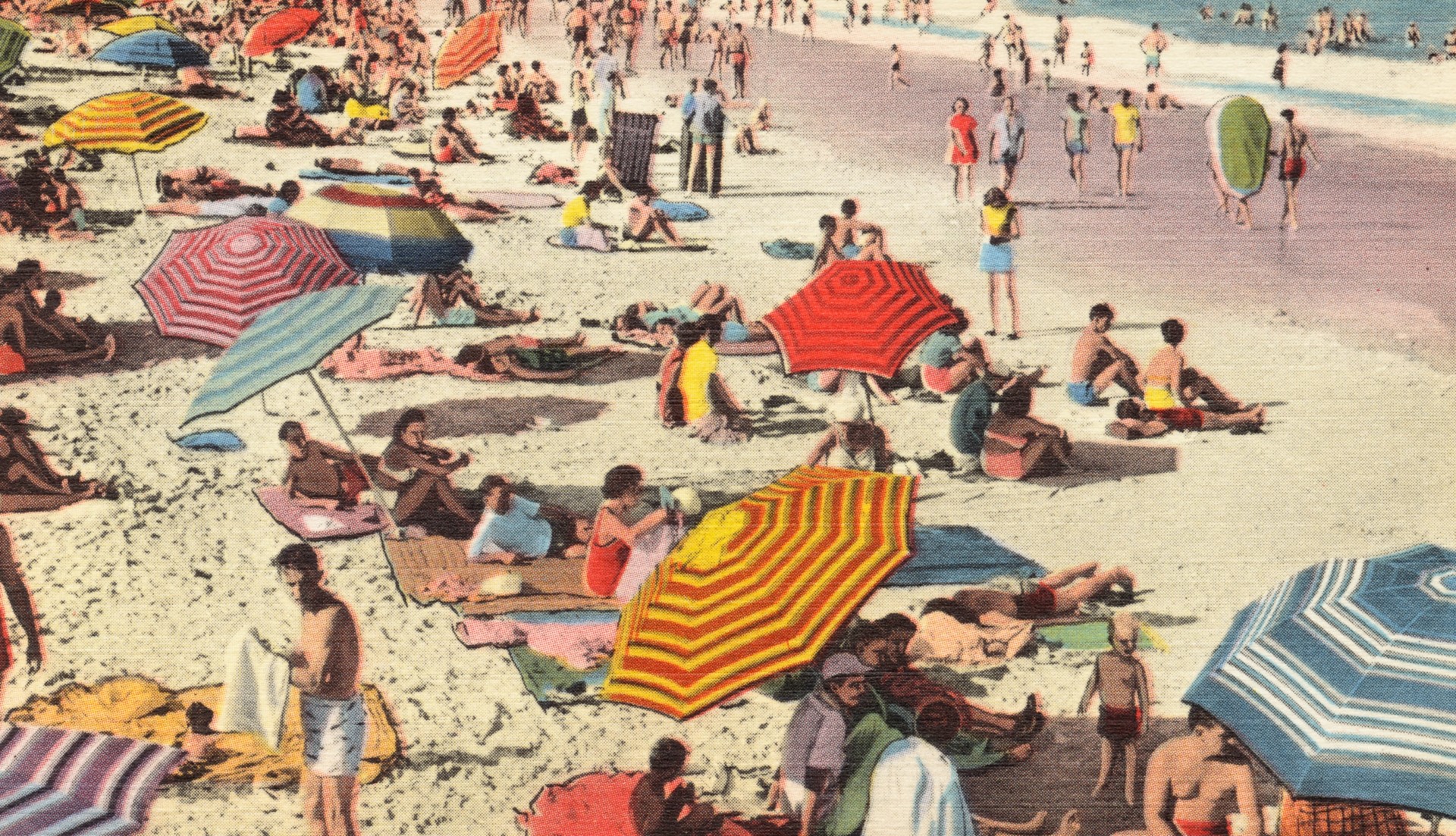 Historically, beach umbrellas have protected us from the elements for over 4000 years. Cultures throughout history have adapted the umbrella’s use to fit the needs of their region’s climate. For several centuries, umbrellas were symbolic of power and luxury. In every culture, umbrellas, or parasols were first used by the nobility, religious leaders, and royalty. Recently, beach umbrellas are in high demand due to their skin-protecting qualities. The history of beach umbrellas weaves an intricate web, spanning far and wide. From Ancient Egypt to modern times, join us as we chronicle the meandering roots of beach umbrellas. 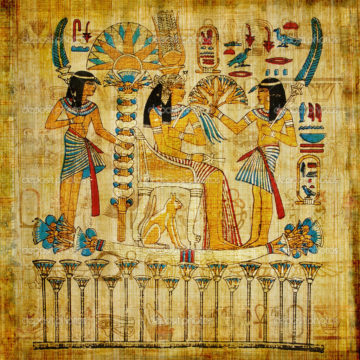 Origins: The History of Beach Umbrellas in Ancient Egypt

The first intended use of the umbrella was not for protection against rain, but for sun protection. Thus, the history of beach umbrellas begins in Ancient Egypt. Umbrellas, or sunshades were first developed and used in Ancient Egypt to protect the nobility and royalty from the sun’s harsh rays. Additionally, pale skin was a sign of power and wealth. As a result, sunshades were reserved for kings and Pharaohs. The hieroglyphic paintings from Ancient Egypt largely depict the lives of gods and royals. Those of great power were painted with sunshades overhead held by staff. The sunshades of Ancient Egypt were made from stretched papyrus, palm leaves, or feathers attached to a stick.

Throughout Ancient Egypt, sunshades and fans were used in tandem to please the king. Fan-bearers and those that carried sunshades are seen surrounding the king in hieroglyphic paintings of Ancient Egypt. Additionally, the size of the sunshades and fans depicted in each painting denoted their intended purpose. Larger sunshades were used to protect one’s eye from solar glare, but were also used symbolically as a way to block onlookers from the brilliance of the high official or king. 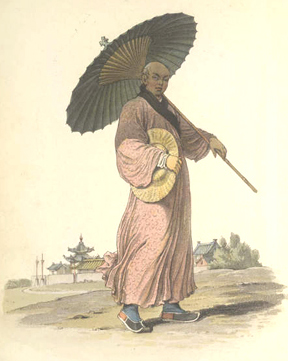 China’s Historic Turn Towards a New Use for Umbrella

In 11th century BC, China began to adapt the umbrella to fit its varied weather patterns. Water-proof parasols were made to protect the nobility from rain and snow. More ornamental parasols were often made from silk and operated on a four-tiered system, which would symbolize a person’s standing. The Emperor would always have a four-tiered parasol. This tradition was later adopted in other regions, where tiers could range from 8 tiers to as many as 24 tiers. 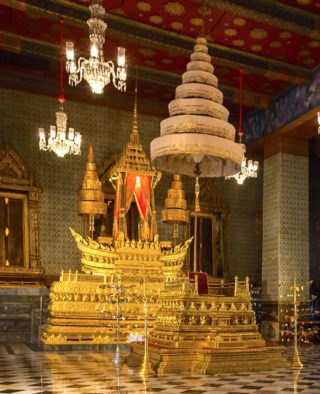 In many parts of Asia, tiered umbrellas distinguish rank to this day. In Thailand, multi-tiered parasols are placed atop thrones. A royal umbrella, or chatra consists of several tiers to denote the various ranks of royals. For example, a crown prince sits under five tiers, an unconsecrated king sits under seven, and a fully sovereign king’s parasol has nine tiers. It is customary for kings to not sit under nine-tiered parasols until the completion of their coronation. The anniversary of the king’s coronation day is a national holiday each year in Thailand. This holiday is called Wan Chantra Mongkol, which translates to “The day of the blessing of the umbrella”.

In Imperial Japan, the Mikado were never without their parasol-bearers when they appeared in public. Additionally, to this day, parasol-bearers stand near the Emperor as he gardens. 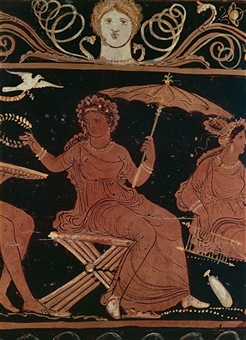 The Feminine Use of Umbrellas in Ancient Greece and Rome

Limited trade routes from China to Europe made for a slow parasol migration, but they eventually popped up in markets across Europe with a vengeance. The non-waterproofed Egyptian parasols were the first to make their way to Europe. Newly-established trades routes made it possible for parasols to show up in the Grecian and Italian markets during the 1st millennia BC. The citizens of Ancient Greece and Rome viewed parasols as feminine accessories. As a result, they became reserved for females and effeminate men.

Umbrellas gained the capacity to open and close and branched off from the status symbol of yesteryear. Slaves and servants began mounting parasols atop carriages and horses. After the fall of the Roman Empire in 5th century AD, umbrellas became extinct for almost 1000 years due to poor living conditions and a lack of technological advancement. However, all of this changed as Europe entered the Renaissance.

The Renaissance Rebirths the Umbrella in Europe

In the late-16th and early-17th century, parasols made their much awaited comeback in Europe. The nobility and royalty were avid users of parasols. Royals in France, Italy, and England were never without a parasol. The Age of Exploration brought these silken parasols west. Additionally, these parasols bore the innovative open-and-close design used by women in Ancient Greece and Rome in 4th century BC. 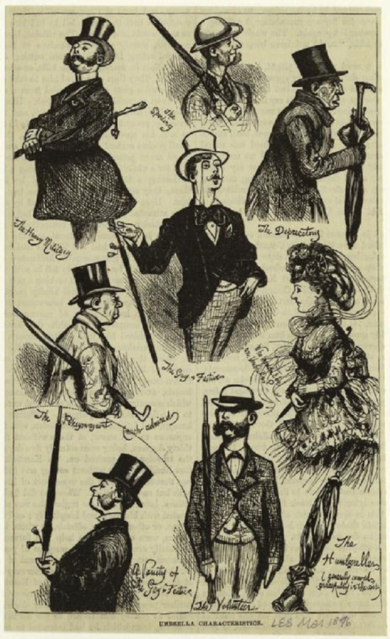 Changing the Feminine Identity of Umbrellas

The use of parasols spread across Europe. Still, only women used them. All of this changed when Jonas Hanway, a Persian traveller and writer, was ridiculed for using an umbrella in London for a number of years. For example, people would throw passing insults at him, calling him “effeminate”, or a “Frenchie”. Eventually, male Londoners began using parasols for their intended use. In fact, men who used umbrellas at this time referred to themselves as “Hanways”.

Umbrella manufacturing was first set up in London in 1787, just one year after Hanway’s death. It was common for parasols to bear acorns as insignia, as oak trees were sacred to the god of thunder. Early parasol handles contained rare woods, leather, ivory, and precious metals. Additionally these parasols were often encrusted with jewels.

Parasols became more compact and durable with advances in technology and manufacturing. As a result, lightweight, water-proof umbrellas replaced parasols. The first shop in the world to exclusively sell umbrellas opened in London in 1830. This shop, James Smith and Sons still exists to this day.

One James Smith and Sons location was too narrow for customers to open up their prospective umbrellas. As a result, customers had to go outside to test them out. Lucky for them, this helped spare them the grave misfortune that comes from opening umbrellas indoors. Evidently, this superstition originated in Ancient Egypt. In Ancient Egypt, opening umbrellas indoors and in the shade offended the God of the Sun. 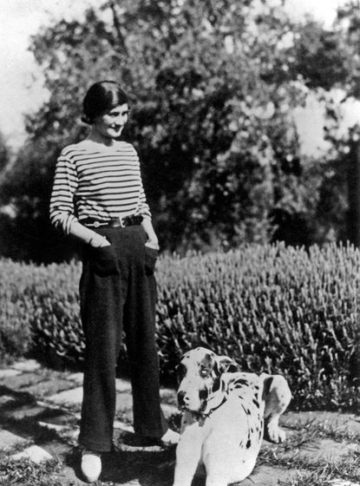 Up until the 1920’s, tanned skin was synonymous with the working class. One simple boat ride in the South of France changed society’s perception of sun-kissed complexions. Coco Chanel was notorious for setting trends during the roaring twenties and beyond. The designer and mogul would vacation in the French Riviera, where she had a beautiful home and a luscious yacht. While lounging on her boat on a particularly sunny day, Coco fell asleep and woke up to an all-over sunburn. It was then that the sunburn came into vogue. Society began to see darker skin as a symbol of wealth, indicative of one’s ability to travel. Makeup brands began selling fake tanners shortly after. As a result, umbrellas were no longer fashionable to protect the elite from the sun’s gaze.

In the 1930’s, movies started veering away from black & white pictures. Suddenly, the general public could see movie stars in living color, which drove the tanning craze further. As bathing suits became less modest in the 1940’s, women were sunbathing in troves along with their beaus. In the 1950’s, UV reflectors came onto the market. UV reflectors accelerated the tanning process, thus eliminating the presence and history of beach umbrellas for a number of decades. 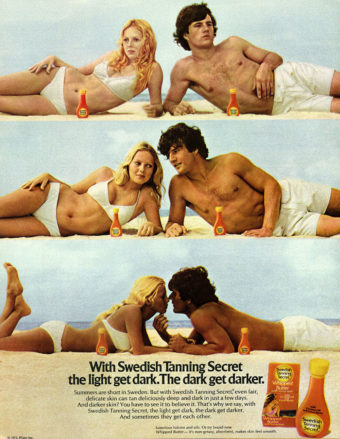 The Continued Historical Popularity of Tanned Skin Throughout the 20th Century

In the 1960’s, cocoa butter rose in popularity due to its tan-accelerating properties. Lotions started containing cocoa butter to darken consumers’ complexion. Additionally, year-round tans became a highly-coveted enterprise, which resulted in the advent of tanning beds. In 1970, Piz Buin introduced the first broad spectrum sunscreens (which you can read about in a previous beachBRELLA® blog post), which protects skin from both UVA and UVB rays. The tanning industry’s hold on society lasted throughout the 20th century and into the early 21st century.

The Need to Protect Our Skin from the Sun: Re-enter the History of Beach Umbrellas

In the early 21st century, spray-on tans became popular, which reduced the need to sunbathe. Additionally, celebrities became forthcoming about their cosmetic procedures. With decades of unprotected tanning under our belts, the fountain of youth had run dry. Today more than ever, society has taken conscious actions to protect their skin from sun damage.

With an emphasis on health and the preservation of our skin’s youthfulness, an uptick in sales of sunscreens and beach umbrellas is rewriting history. The importance of shielding ourselves from the effects of the sun is important to our development as a society. So grab your broad spectrum sunscreen and favorite beach umbrella and take to the beaches this summer without regret!

We hope you enjoyed our recounting of the history of beach umbrellas as much as we enjoyed sifting through its twists and turns. Today, everyone can live like the royals of yesteryear and enjoy their sunny surroundings under the cover of their very own beachBRELLA®.

Paige Barry is an actress, writer, puppeteer, and all-around creative person based out of NYC. A Rhode Island native, she enjoys the beach, seafood, and any combination of the words "coffee" and "milk".