The History of Lifeguards

The History of Lifeguards

The history of lifeguards takes us back to the early 19th century. As the growing popularity of swimming started to become concerning to many local authorities. After there was a dramatic increase in drownings. Many began to round up some ideas to combat these drownings. Lifeguards have been an essential aspect of beach-going across America. I don’t think any of us have a memory without a lifeguard on the beach.

How it all Began

One of the first proposals to come into place was to place lifelines that extended out into the ocean. This was for swimmers to grab onto if they needed any additional help. However, this idea proved unsuccessful when the swimmers could not reach these lifelines in time. Many had assigned police officers to look over the beaches and rescue struggling swimmers in some communities. Nonetheless, this posed a problem to the communities as it used the resources needed to further protect the community from other harm.

In 1914, a man named Wilbert E. Longfellow created a program that instructed swimmers to conduct lifesaving exercises. These exercises include resuscitation, which brings us to the beginning of the history of lifeguards. This training program became known as the American Red Cross Lifesaving. And was created in order to combat drownings and any help needed in the ocean. From here on out, lifeguards have become a favored career choice. 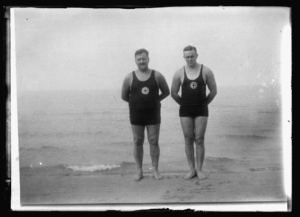 1930 Lifeguards on the beach

The history of lifeguards in the Southern California beach communities didn’t truly start until about the 1930s. San Clemente Beach began its lifeguard service in 1931. After being established six years prior in 1925.  Bob Isner a former lifeguard was directed to form a lifeguard service in Huntington Beach, CA. 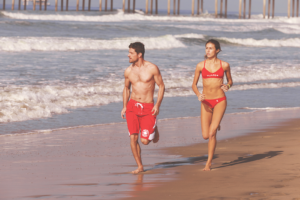 Two lifeguards on the beach

Now more than ever. Lifeguards have become an important part of the beach-going throughout the United States. And according to the CDC, lifeguards rescue more than 100,000 individuals from drowning every year. Remember that if you are not a strong swimmer but want to go swimming always swim where a lifeguard is present.